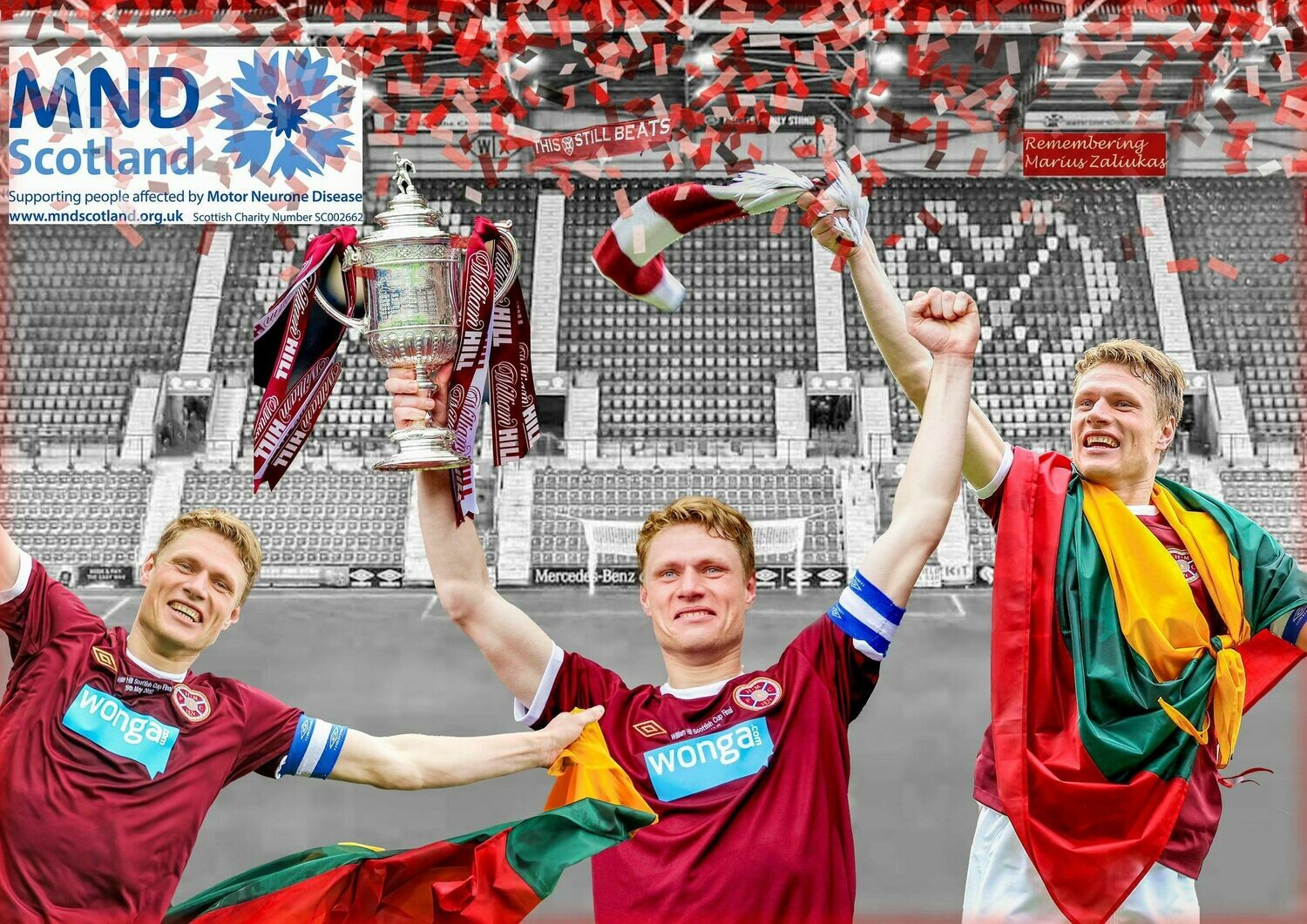 We are delighted to launch this very special A3 montage print, in memory of the Lithuanian Centre Half.

The former defender had been battling Motor Neurone Disease since 2018, and sadly became the latest name from Scottish football to succumb to the condition after Celtic great Jimmy Johnstone, former Rangers skipper Fernando Ricksen and ex-Hearts and Falkirk man David Hagen.

All profits from this print will be donated to MND Scotland, in Marius's name.

From the boardroom to the stands, everyone connected with the Heart of Midlothian Football Club was shocked and saddened to learn that Marius Žaliūkas had passed away, eleven days before his thirty-seventh birthday, after a brave struggle against motor neurone disease.

During his time in the capital, this engaging young man was a fine player, extremely popular with his team-mates and a great favorite with the supporters. Accordingly, he will long be remembered at Tynecastle Park.

Marius was born on 10 November 1983 at Kursenai in Lithuania and with physical presence and positional skills, he was an outstanding central defender who became Hearts’ captain in August 2010. In addition, the towering Lithuanian was a regular International player, gaining 25 caps for his homeland between 2006 and 2016.

Marius came to Edinburgh in August 2006, initially on loan from Kaunas FBK, where he twice won the Lithuanian League Championship (2004 and 2006) and was twice on the winning side in the Lithuanian Cup Final (2004 and 2005). He played regularly in European competitions and the 6’2” defender also had previous experience with two other clubs in Lithuania, FK Inkaras Kaunas and FK Silute.

Marius played a big part in Hearts claiming third place in the SPL in 2008-09 and fully merited his 18-month loan extension, despite being sent-off four times. Marius was, in fact, appointed vice-captain for 2009-10, although he was badly missed during the first half of that season, due to ankle and hamstring injuries.

Manager, Jim Jefferies, promoted the big stopper to captain the following season and when his contract with Kaunas FBK expired, Marius was signed on a permanent basis, from November 2010 until the summer of 2013. He led Hearts to third place in the SPL in 2010-11 and, of course, Marius famously captained Hearts to a 5-1 victory over Hibernian in the Scottish Cup Final of 2012.

Due to injury and suspension, he was sorely missed in the League Cup Final against St.Mirren in March 2013, and then sadly, Marius left the club in the summer of 2013 after Hearts went into administration. After trial periods with both Rangers and Queens Park Rangers, Marius signed for Championship club, Leeds United, in October 2013. He then moved to Rangers in July 2014 and played against Hearts in the Championship Division before moving back home to Lithuania in August 2015. Marius subsequently played for Zalgiris Vilnius.

The majestic Lithuanian defender has made more appearances for Hearts than any other overseas player, with 222 competitive games and 15 goals. His beaming smile when holding the Scottish Cup in 2012 is an iconic moment in Hearts’ history. Marius also has legendary status in Lithuania where he is regarded as an inspiration to young players who want to appear in the top leagues of Europe.

Our deepest condolences are extended to his wife Nora and family.